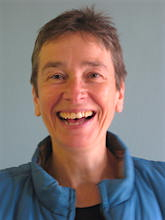 I was born in County Durham in the North-East of England in 1962, the only child of two teachers.  I would say that my childhood was happy and secure, whereas my teenage years were more mixed: I did well at school, had many friends and some enjoyable times, but struggled with my parents at not being allowed the degree of freedom and independence I longed for.

I went to university in Bradford at 18, to study Modern Languages, and spent six months in Paris and six months in the then German Democratic Republic as part of my course. These experiences changed me - I suddenly saw that it was possible to have a very different outlook on life than the one I'd grown up with.

At 22 I went to Nepal with Voluntary Service Overseas. I stayed there for two years, living in a remote, conservative Hindu area in the Far West of the country. The experience was rich and fascinating, as well as shocking and challenging, especially witnessing the commonplace discriminatory practices towards women and girls and the so-called "Untouchables". I didn't really encounter Buddhism in Nepal, but I think a seed was sown by a visit to Lumbini, and by time spent around the big stupa in Bodh Nath.

By the late 1980s I was living in London. I had all I wanted: a good teaching job, a ﬂat of my own, many friends, and regular holidays abroad. But something was missing. I was also experiencing a lot of "relationship dukkha". This propelled me through the doors of the London Buddhist Centre in 1990 for an introductory evening, and I found myself crying my eyes out at the bus stop on the way home. Something had opened up, and the following years saw me increasingly moving away from "worldly" contexts, to live more and more of my life within the Triratna Sangha.

I was ordained in Tuscany in 1999 by Karunamaya. I have since spent time working with her and Vajrasuri in the Indian women's ordination process, have fundraised and/or led 17 Karuna appeals, worked for two years in Lama's Pyjamas, and lived in six different communities. I joined the team at Tiratnaloka in 2012, and have privately ordained two ﬁne women to date. I became an Anagarika in 2015, and a member of the College of Public Preceptors in March 2018. One of my greatest passions is music, and I have been having singing lessons for 11 years. I try to practise every day, wherever I happen to be!