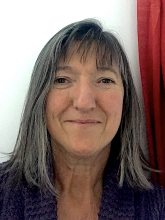 I learned to meditate in 1983 at the Glasgow Buddhist Centre, while I was a student. My boyfriend at the time thought it would be good for me, and he was right! On graduating I didn’t know what to do, so I helped out in at Ink Print & Design (one of the local men’s Right Livelihood businesses), photocopied Sangharakshita’s transcribed seminars (pre-Internet!), posted out books for Windhorse Publications, helped set up the women’s community ‘Viryagita’, and cleaned the Centre’s toilets. Very soon I was working at Ink full-time. Two years later I came to the LBC for three months to help out a women’s right livelihood business, Windhorse Typesetters, living with Dharmacharinis and women Mitras in the new, bigger Samayatara community. I soon knew that if I wanted to learn more about Going for Refuge, that needed to be from women (there were no Dharmacharinis then in Glasgow). So I stayed, for the next 28 years, working and living in and around the LBC, inspired by Sangharakshita’s vision of friendship, the individual, community, and the new society. When we sold the Typesetters to the anarchist Aldgate Press in Whitechapel, I went with it and ran the typesetting department for two years, hiring Buddhists along the way. The Buddhists and the Anarchists always got on very well!

I was ordained in 1992 at Taraloka, aged 30. Since then I have taught meditation, Buddhism, Mitra study, working especially with fellow Order members and women training for ordination, since 2006 as a private preceptor and president. Along the way I worked as a sales rep for Windhorse Publications, a freelance typesetter, an apprentice meditation teacher on the Government’s Enterprise Allowance scheme, housing manager at Phoenix Housing Coop (originally set up by Buddhists), and for 7 years manager at Windhorse’s Evolution gift shop in Bethnal Green. I was secretary to the European Chairs’ Assembly in the early 2000s, then worked for 9 years at the LBC as Dharma coordinator, programme manager, teacher, mentor, retreat leader and, for 18 years, as trustee. I left there to work for the ECA again in 2013, as part of the Development Team.

I have lived in different settings, enjoying (and helping create) women’s communities for more than 20 years, including being a founder member of ‘Samayakula’ community in Bethnal Green, a successor to (and inspired by) that Samayatara community of 20 years before. I also lived with a partner for 3 years, alone for a year, and now live in Frome with my husband, Rijumani, and my garden. For many years all this was alongside long-distance care for my dear elderly parents in Scotland until their deaths in 2013.

After training and working as a Craniosacral therapist, moving to Frome in Somerset, and a few years of ill-health, I am involved locally with our small Triratna group, and keen to explore new forms of communal living. I have loved the ‘rough magic’ of my wide-ranging, usually team-based, often intense, always interesting spiritual life; it has grown me, and let me be part of helping other people to grow too, practically, emotionally, and spiritually. It has also made me many dear friends. And it continues now in yet another form: I am delighted to be a part-time, non-residential member of the Ordination team, as Tiratanaloka steps into its next exciting phase.